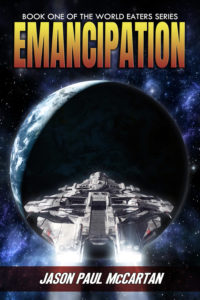 The first book in the WORLD EATERS series has been released! Newly-graduated marine officer Jack Conway finds himself on the front lines on the escalating war with the Shiveen after they attack a border planet. While engaging with the enemy, he finds himself in charge of his fireteam and a group of civilian scientists who’ve made an incredible discovery.

EMANCIPATION can be purchased at Amazon for $2.99, or can be read as part of a Kindle Unlimited subscription.

Print editions of the book will be available soon.